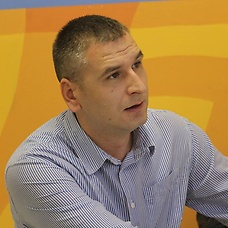 Young people from Birač region are determined to succeed, despite the challenges and lack of opportunities. Meet Milovan, one of the beneficiaries of the Economic Empowerment of Youth project. Over the past five years many efforts have been made in order to support soft fruit production in Birač region, resulting in a steady growth of this sector and an estimate of 1500 raspberry producers. This is not a surprise, considering the high unemployment rate in B&H, that drives people to seek an alternative source of income.

But what happens to young people who are facing long-term unemployment after many years of education? How does a lack of decent jobs and economic resources affect this population? Young people are often marginalized, as they make up more than half of the total number of unemployed in Birač region. Disappointed and hopeless, is leaving the region the only option they have, since agriculture is definitely not a solution for everyone?

Milovan Petković, an entrepreneur from Milići, sums up the experience of many young people from Birač region:

Our grandfathers have occupied woods and meadows, our fathers all major functions in society, and when it comes to us young people, only virtual world remains.

What makes Milovan stand out from the crowd is his inexhaustible hunger for knowledge. This professor of physics is also an awarded mathematician and an avid reader, self-thought in programming and digital marketing. A few years ago, the lack of job opportunities in Milići lead this brilliant young man to leave the country and seek for his luck elsewhere. After realizing that it’s not the life he had imagined, and that due to the lack of time he had no prospects of developing his own ideas, Milovan decided to return home and give it another try.

As soon as he managed to get Internet connection in Milići, he started working on different business ideas and new possibilities suddenly opened for him. Milovan learned and developed his ideas accordingly. He is now the owner of several games and applications, one of which is Man truck errors, an app for truck drivers.

Let’s imagine that a truck driver is faced with a problem or a breakdown on the road. Very often, he’s in the middle of nowhere, or it’s late in the night and the repair services are not open. When a failure happens, the dashboard of the truck shows a code error that can mean anything. The biggest dilemma for the driver in this situation is weather to stop and waste precious time, or to continue driving despite the risk. My idea helps truck drivers make an informed decision, with an application that translates the error and tells them what’s the best thing to do, and how to find help on the road.

Milovan was one of the beneficiaries of the Economic Empowerment of Youth project, implemented by Kolektiv/Posao.ba from March 2015 to March 2017. Trough this project, 12 new startups from Birač region were supported for development of innovative business ideas. Young people from five municipalities would gather at the Business center Srebrenica, an incubator and co-working space established through the project, where they learned about business development. This is where Milovan got additional motivation to start his business and an opportunity to connect with other entrepreneurs. It took a year of development before the first version of the app was available on Google Play, but first customers came after only a couple of weeks.

The Internet gives you the ability to test ideas and even start your business and reach first customers for a minimal cost. Never before did we have such opportunities and we need to use them. There are many businesses that one can start from anywhere.

Although IT sector in Bosnia and Herzegovina has a great potential for development, Milovan believes that the country is facing a serious problem, since young educated people are leaving:

Both hardware and software are needed to develop IT sector. Hardware is technology and infrastructure that requires money; software are brains and young people with ideas. I’m afraid we’ll miss the opportunity, the changes are not happening fast enough, there is no systematic approach to problem solving, and young people are the weakest link in the chain. What concerns me the most is the brain drain, because it could mean that once we finally have the infrastructure, we won’t have enough young people to implement the ideas.

Milovan is optimistic that things will change, and says that despite the adversities young people face, they should work hard and never give up on their ideas. He himself is not wasting time, but working on a new project. There are many young people like Milovan, who are hoping that the authorities will take more serious measures, and work on creating better opportunities for youth, not exclusively in agriculture and farming.

Milovan received the award for the best business plan and realized project.